A Girl’s Coming of Age in Mexico – La Quinceañera

Prepare for heavy partying. We’ve been invited to our niece’s quinceañera (keen-seen-YER-ah) in Chihuahua Mexico with friends and family arriving from around northern Mexico and the United Sates for it. So what exactly is a quinceañera anyway?

In Spanish, “quince” (KEEN-say) is the number fifteen and the ending “era” indicates a specific event related to that number. Throughout Latin America quinceañera means a traditional celebration of a young girl’s transition from childhood to adulthood on her fifteenth birthday. Quinceañeras are formal events starting with a mass at church followed by a reception, often a lavish one, after which there are typically parties with friends and family. These events can be fairly simple affairs or go on for days, one party succeeding the other. A large quinceañera can cost thousands, even tens of thousands of dollars, but the expense is usually distributed among family and friends whom accept roles as “padrinos” (godfathers) for specific parts of the celebration; one patron paying for the music, another for the food, etc.

On the day of Adriana’s quinceañera we arrived at the church and found it was to be a multiple mass – three girls were sharing the church ceremony for their quinceañeras. Adriana was resplendent in her Cinderella dress of white satin, an enormous gold bow tied at the back and a sparkling crown in her hair. The parents presented their daughters to the priest for his benediction and after lots of posing for photos, the mass was over in 1 ½ hours. Afterwards everyone went home for a few hours’ rest and then to their respective receptions. 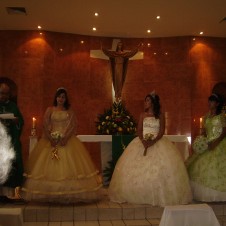 Adriana’s reception was held in a walled-in outdoor pavilion on the edge of town, set in a garden of palm trees and grass, with a large tiled dance area, a bar, kitchen, chocolate fountain, two bands playing and a couple of burly, stern-faced guards to keep any party crashers out. The crowd of family and friends was 150 strong and as we settled in Adriana made her entrance. Still in her formal dress she walked through a line of uniformed cadets from the military academy, swords uplifted in salute. As the band played, she danced the first dance, a waltz, with her father, then with her uncles, her boyfriend and finally everyone joined in.

Father dances with his Daughter 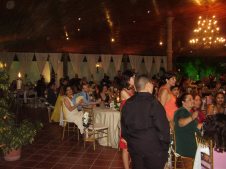 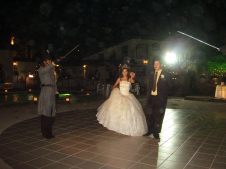 Changing of the shoes

La Quinceañera with her parents, grandparents and boy friend’s parents

Everyone danced for a couple hours until the band announced Adriana’s coming of age and, seated before the crowd, her father presented her with a doll dressed in a miniature dress identical to Adriana’s. Adriana gently rocked the doll for some minutes and then placed it into a decorated box and closed the lid, symbolically putting way childish things as she faced adulthood. Then her father helped her change from the flat slippers of a girl to the high heels of a woman and the transformation to womanhood was complete. The crowd toasted her as a delicious dinner was served. Then more dancing and celebrating until the party ended in the wee hours of the morning. 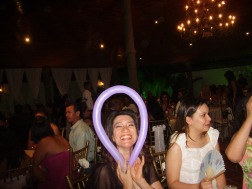 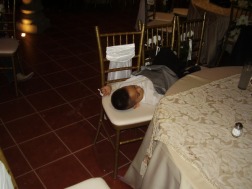 Next day; It’s the party after the party. Adriana’s parents had rented another outdoor salón, this one much less formal, but with a big tank of water which was soon full with every kid under 18 years old, and later with a good many of the adults too. Adriana’s grandfather, Alejandro, had brought his equipment for making his famous chile Colorado (a mix of pork stew cooked in a red chile sauce). I love this stuff and we anxiously awaited this delicacy as he stirred his cauldron of meat sauce with a large paddle. We spent the day eating chile colorado and drinking cold beer under the trees, hiding from the hot afternoon sun. Some of Adriana’s friends showed up with guitars and accordions and we sang along with popular ranchero songs. As evening approached everyone dispersed to their various houses and we spent the rest of the night visiting between them, eating, drinking and joking late into the night. 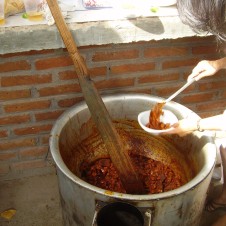 A Tank Full of Kids

We aren’t done yet – it’s time for the party after the party after the quinceañera . We decided to go to a park in the countryside outside of Chihuahua with a group of aunts, uncles, nieces and nephews so we loaded up a few cars with essential supplies (beer and food) and caravanned to the nearby town of Aldama in the ranch country surrounding Chihuahua. We found a shady local park equipped with the standard large tank of water into which we immediately deposited all the kids. That chore done, it’s time to sip beers and visit at the picnic tables under the trees.

We noticed a cowboy by the park entrance with a couple of horses saddled up and rented them for 60 pesos per hour each (about $5). These horses had some spirit and we had great fun taking turns galloping around the park. But the crowd was getting hungry, so we packed up and left for a nearby restaurant specializing in fried fish. We had a great meal there and I told the kids that that in Alaska people dried out the fish skeletons to use as combs and soon they were washing off the bones from their plates and combing their hair with them as their parents shook their heads at me. 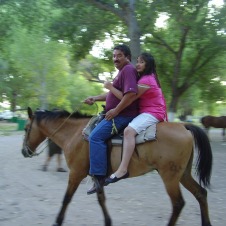 Riding in the Park 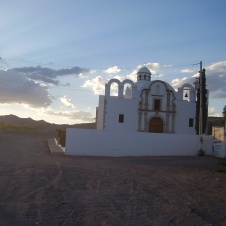 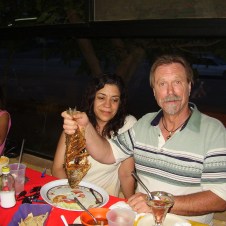 By now we were partied out and spent the rest of our visit exploring the Quinta Carolina, a 19th century hacienda within the city of Chihuahua. Oddly, even most Chihuahua residents haven’t been to this historic place, now falling into slow decay and a strangely situated amid modern industrial Chihuahua. In its day it was an entire town with a blacksmith’s shop, stables, stores, granaries, shop owners’ houses, and the massive main mansion in the center of it all. The hacienda chapel is still used by the owners, the wealthy Tarrazas family.

An Owl Stares Back – Hacienda Carolina

We finished out our visit with an expedition to the Mennonite small city of Cuauhtemoc and surrounding canyon lands of the Sierra Madre Mountains, but that’s a separate story (see post for Into the Outback of Chihuahua, Mexico). For now, the quinceañera was over and it’s time to go home.