Today we will sail into the Salish Sea; the intricate network of deep salt water passages through the islands between Canada and Washington State’s Puget Sound north of Seattle. We’ll travel aboard the wooden sailing ship, Spike Africa, named for the legendary sailing ship captain of the same name. She’s a classic 62-foot schooner, double-masted, sleek, bright and beautiful. We’ll be sailing near San Juan Island, the largest island in the archipelago spread between Canada and Washington State with the snow-capped Cascade Mountains forming the background to the forested islands. 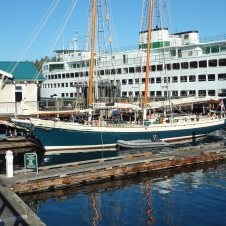 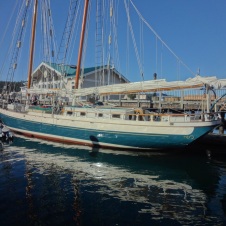 This trip is an evening “sunset” cruise and it’s autumn. Winter storms will start blowing in soon so this is the last trip of the year for the Spike Africa. There were sixteen passengers in addition to the crew of four. Captain Tom maneuvered the schooner out of its slip at the city docks in Friday Harbor under power, but as soon as we cleared the piers, he turned off the motor and up went the sails; mainsail, foresail and double jibs in the front. As the sails filled with wind, the Spike Africa moved ahead, smoothly and quietly. 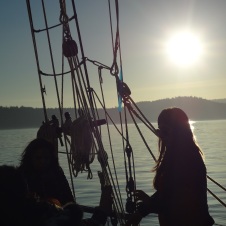 Soon everyone was chatting and lounging on deck. It was a perfect fall day; the sea calm, the volcanic cone of Mt Baker shining brightly with fresh snow on the horizon, and the afternoon sun reflecting across the water. 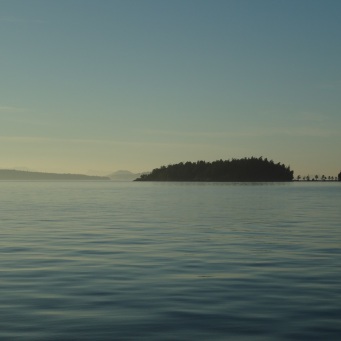 I helped the crew for the final hoist of the foresail by “sweating” the ropes (leaning back while holding the rope to use body weight to tighten the slack) while the first mate tied it off to a cleat. Then as we sailed up San Juan Channel between Shaw and San Juan Islands Captain Tom asked if anyone wanted to man the helm (steer the ship) – I immediately stepped forward of course. I took the wheel and following the captain’s instructions set a heading across the channel while watching the small banner on top of the main mast which indicates the wind direction in order to keep the wind in the sails. The Spike Africa handled remarkably smoothly and I soon became accustomed to adjusting the course of the ship to the combination of water currents below and the wind above. 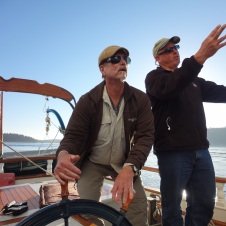 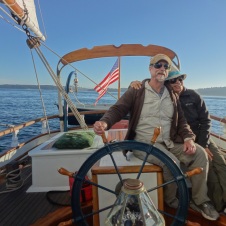 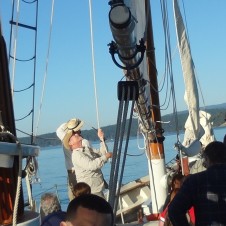 Captain Tom said to come about (turn the ship in the opposite direction) so I put the wheel hard over. The Spike Africa responded immediately, the wooden booms holding the bottom end of the sails swung over to the opposite side of the ship, and within minutes we were sailing off to the west. I turned the helm over to another passenger and went below to check out the cabin area. The schooner was as pretty below deck as above with its wooden galley way, ladders and cabinets. 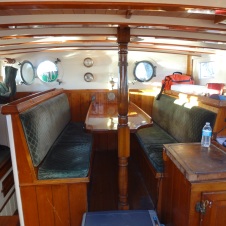 I returned above and the sun began to set. As we slowly cruised along it set behind San Juan Island and we were struck by the tranquility of quietly sailing along through the islands, no motor noise or fumes, just the sound of sea birds in the distance and water gently lapping against the hull. 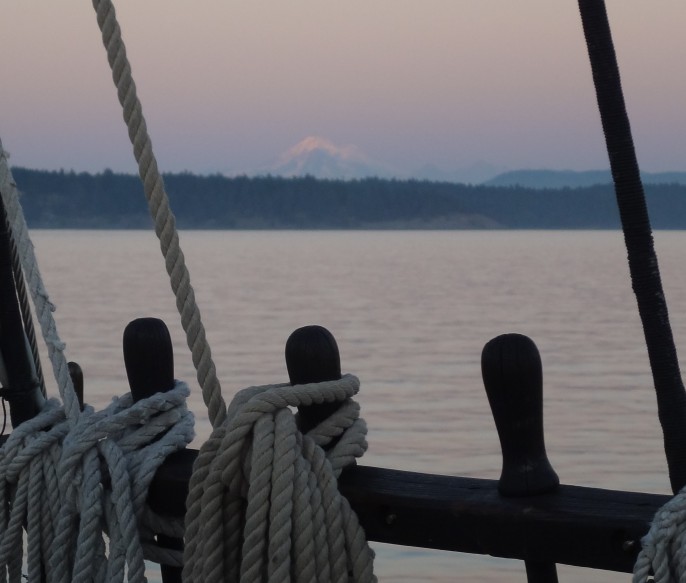 As we approached Friday Harbor the glaciers of Mt Baker glowed pink in the final light of day while far off to the west the Olympic Mountains darkened into a black, jagged silhouette. The lights of the harbor threw reflections across the small bay as Captain Tom ordered the sails down. He started the engine and skillfully maneuvered the schooner back into its slip along the dock.

It had been quite a day and well worth the $42 per person fee to sail for a few hours on a wooden “tall ship” through the Salish Sea. You can book a trip on the Spike Africa through SchoonersNorth.com. Their office is located in Friday Harbor, San Juan Island. And, if you do this trip, consider bringing a basket of wine and cheese along, a great way to cap off the trip.

Before this trip Sonia and I had been considering doing more sailing, maybe even getting certified as sailors through the American Sailing Association in order to be able to lease “bare boats” (renting sailing boats to self-crew). And, after this trip, I think we’ve caught the sailing bug for sure.