November 2014 – A Winter Trek in the High Country

Its mid-November and the first snows have dusted Washington State’s Cascade Mountains, but it isn’t deep yet. Still time for some day hikes into the high country. So, referring to my ancient copy of Ira Spring’s hiking guidebook, “100 Hikes in Washington’s Glacier Peak Region” I picked out an obscure hike to Greider Lakes, a pair of small alpine lakes high up in a lonely basin surrounded by cliffs outside of the tiny town of Sultan, Washington.

The guidebook advised this was a short, but strenuous hike, only four miles round trip, but close to 1,500 feet in elevation gain. I’d hike up and then back down during the day. Sounds good, so I packed a ham sandwich and a banana, filled my water bottle, threw my watch cap and down vest into our old Oldsmobile and headed for the mountains.

Sultan is on highway 2 on the way to Steven’s pass and only a half hour’s drive from Everett on Interstate Highway 5. Everett itself is only half an hour north of Seattle, so the trailhead wasn’t that far away. But the drive through the forest from Sultan to the trailhead added another 45-minutes. No matter, the valley outside of Sultan was beautiful with the jagged peaks of Mt Index and Mt Baring rising over frosty farm fields and the road paved until the last 15-miles of gravel road.

The guidebook said the trail to the lakes was inside of the City of Everett’s watershed area and that the road ended at the trailhead. But when I arrived at the last parking area at the end of the road I found that the trailhead up to the lakes was a two mile hike from the parking area. Ah ha! The access road had been permanently closed since the publication of my old guidebook, so now I’d have an addition two miles to hike along the old abandoned road just to reach the trailhead where the two-mile climb up to the lakes started. My four mile round trip hike had just turned into an eight mile hike – closer to nine.

Oh well. I locked the car, shouldered my daypack and started off down the frosty and frozen abandoned road. It was actually pretty nice – a wide roadway that wound through the forest past a series of beaver dams, fern-covered bluffs covered with impressive icicles and with the winter sun shining through the mossy forest. I reached the trailhead in little over an hour.

At the trailhead I could hear strange crashing sounds from the mountainside above me. Later I would find that the noise was from large icicles melting in the afternoon sun and crashing down on the trail. The trail was in good shape, but rocky and steep. I reached the top after an hour of steady climbing – over 1,000 feet in little over a mile. The trail leveled out for the last ½ mile to the lower Greider Lake.

The small alpine lake was frozen. In the high country small, enclosed basins like this one can trap pockets of cold air making distinctly different local climate zones and this was the case with the lower Greider Lake. It was noticeably colder in the tight little basin than in the forest around it. Still, it was a beautiful sight, but I decided to hike on the last ½ mile to the upper and larger Greider Lake and glad I did. 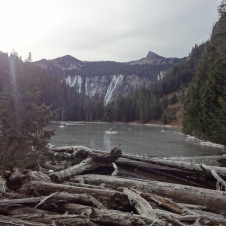 The trail ends at the upper lake and though slightly higher than the lower lake, it was ice-free. Since this lake is in a somewhat more open basin, the weak winter sun had kept it from freezing up just yet, but the cliff sides across the lake were covered with frozen waterfalls. The water was perfectly still, no wind to ripple the surface, and the cliffs were perfectly reflected in the mirror-like surface of the lake. It actually gave me a little vertigo to look at the inverted cliffs reflected across the lake – a strange double-image that joined at the base. 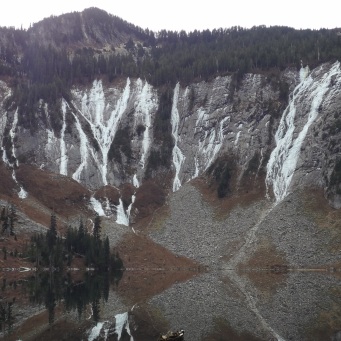 I had enough time for a quick lunch before starting the descent down the frozen, steep trail. I didn’t waste any time wanting to be back at the car before dark. I chased some curious deer along as I hiked and made the four and half miles or so from the lakes to the car in two hours.

It was a great day-hike, time to plan the next one, but first I’ve got to get some newer guidebooks.