After enjoying the pastoral wine country of Sonoma Valley we drove across the Central Valley and its endless fields of corn and climbed into the foothills of the Sierra Nevada mountains. This is gold rush country; the old wild west.

The discovery of rich deposits of gold along the western front of the Sierra Nevada in the mid-1800s sparked the great California gold rush drawing prospectors, outlaws, prostitutes, gamblers and conmen into wooden plank boomtowns that sprouted wherever a mine was established. But now it was early July, the old boomtowns are sleepy villages, and it was hot!

We had reservations at a U.S. Forest Service camp at Pinecrest Campground on highway 108 in the higher mountains. But, when we arrived we found it obscenely crowded and too tight to maneuver our twenty eight foot-long trailer through. So, we drove back down highway 108 and found a large turnout where we bivouacked for the night, not even unhitching the trailer from the truck. We’d figure out where to stay in the morning.

The next morning we drove back down to New Melones Lake, a large reservoir operated by the U.S. Army Corps of Engineers, and their Glory Hole Campground. We tried to maneuver into a spot with at least a little shade, but I caught the front of the truck on a post bending the bumper badly. Oh well, another thing on the fix-it list. After a cathartic round of cussing at the post and bent bumper we left. It was way too hot there anyway.

Finally, we decided to camp at nearby Angels Camp RV and Camping Resort, a private RV park just two miles south of the old west town of Angels Camp for $42/night with full hookups, good cellular signal, and weak WiFi. We could do laundry there, catch up on communications, and use the resort as a base to visit nearby Calaveras Big Trees State Park. Best of all they had a small swimming pool to cool off in. After setting up the fifth wheel next to a horse pasture we unhitched from it and could explore the area with just the truck.

We spent the afternoon walking through quiet little Angels Camp, a well-preserved gold rush town, and even found an auto body shop to pull the bent bumper out enough so it didn’t rub on the tire. But for dinner we drove into nearby Sonora and found it a larger and livelier version of Angels Camp. Sonora is also a well-preserved gold rush-era small city, it’s main street lined with 19th century buildings. We ate an excellent dinner at Emberz, a bar and restaurant along main street, and exhausted, returned to our camp to sleep. 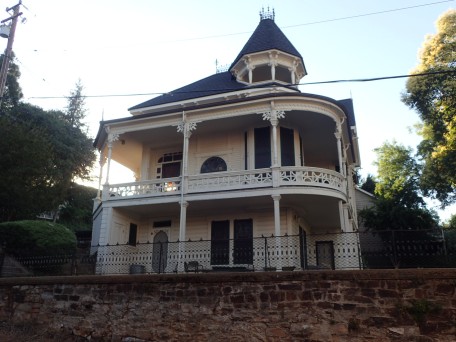 Many of these little towns were rough and rowdy gold rush camps in the mid-1800s full of colorful characters like Mark Twain who wrote his story, The Jumping Frog of Calaveras County here. Angels Camp still holds an annual frog jumping contest and posts the winners in bronze plaques along the sidewalk like Hollywood’s walk of the stars. Then there’s Black Bart, the bandit/poet. Dressed in his black suit and bowler hat, Black Bart became famous for the poems he’d leave with the stagecoaches that he robbed:

I’ve labored long and hard, for honor and for riches.
But on my corns too long you’ve tread, you fine-haired sons-of-bitches. 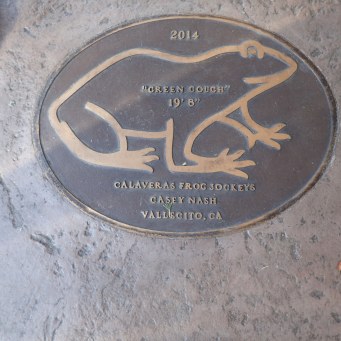 The next morning we drove to Calaveras Big Trees State Park to see the giant sequoia trees there. Along the way we stopped at a fruit stand where Sonia bought a rhubarb/strawberry pie – what a treat! We’ll be eating on that for a week.

Calaveras Big Trees State Park is a must-see for anyone traveling through this part of the country. The redwood trees along the coast were gigantic, but nothing can prepare you for the sheer massive size of the giant sequoias, the largest living things on the planet. Trees thirty feet in diameter and over two hundred feet tall and they are spectacular.

After wandering through the North Grove of sequoias we visited Murphys, another gold rush era town, where we tasted wine at some of the many tasting rooms there. Murphys is another place that should be on anyone’s must-see list. It’s a small, shady, 19th century town with a distinctive sophisticated vibe from all the local wineries and restaurants.

After Murphys it was taking care of business for us; grocery shopping at tiny Arnold with its surprisingly good stores, filling the truck and an extra five-gallon jug with diesel fuel, and washing the accumulated mud and road slime off the truck at the self-serve car wash there. The rest of the day was spent back at the RV resort doing laundry and preparing for our next move; high into the Sierra Nevada mountains to escape the heat.

Summer had arrived in gold rush country and day time temperatures were reaching 100 degrees. We had only been in Angels Camp for two days, but it was too hot for us. Our next stop would be over the crest of the Sierra Nevada to the eastern side along legendary highway 395 with its cool camps in pine forests below the 13,000 foot high, snow-capped peaks of the High Sierra.