After spending most of July in the eastern Sierra Nevada mountains we took highway 395 north following a series of small highways and back roads that penetrate the volcanic lands of northern California. This is a land of high, juniper-covered, arid sage lands punctuated by massive ancient lava flows, mineral hot springs, and glacier-covered volcanoes rising above it all. This is the Volcanic Byway.

We followed highway 395 from our camp in the high sierra north towards Carson City, Nevada leaving the stark, granite crags of the Sierra Nevada behind and entering a landscape of lower, pine and fir covered hills. We had arrived at the southern end of the Cascade Mountain Range and the transition from the Sierra Nevada was obvious. From here the Cascades rise into a string of glacier-covered volcanoes rising over vast, forested wilderness that start at the smoldering peaks of Mount Lassen in northern California, continue through Oregon and Washington State, and reach far into Canada.

Mount Lassen marks the beginning of the Cascade Range and that was our goal, but first we stopped at Davis Creek, a Washoe County Campground, outside of Carson City Nevada to break up the long drive. Here we had hoped to rest up for three or four nights; stock up our supplies and maybe catch a show at nearby Lake Tahoe. The camp, overlooking Washoe Lake, was in a shady ponderosa pine forest and almost empty. It was comfortable at $20/night. No power hookups, but bathrooms with sinks,water at community spigots, bathrooms with flush toilets and pay showers, and a RV dump station (for an additional $5 fee). There was some highway noise from distant 395, but we had a weak AT&T cellular signal that we could use to access the internet using our phone as a WiFi hotspot.

Smoke from forest fires raging far away on the east side of the sierra had drifted over the mountains and down into the Washoe Valley making our eyes burn from the thick, acrid air. Still, we stocked our trailer up at CostCo, had an excellent lunch at Arlene’s in Carson City’s historical district, and took a day trip to nearby Virginia City National Historical Monument, site of the richest silver mine in the old west. Its main street is still lined with the original false-front wooden saloons, stores and wood plank sidewalks. Even though it was crowded with tourists we enjoyed it and spent the whole day walking around the historical small city and sipping a beer at the Bucket of Blood saloon. 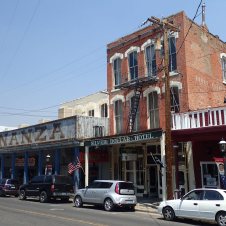 But, the forest fire smoke had thickened giving us headaches and burning our eyes so badly that we decided to leave first thing in the morning. Disappointed that we couldn’t have stayed at Davis Creek longer we drove on to Mount Lassen National Park, leaving the forest fires behind. By afternoon we had reached our next camp at remote Butte Lake in the far northeastern side of the park.

Butte Lake Campground is at the end of a ten-mile long gravel road and twenty-five miles from the main entrance into Lassen National Park. According to Park Service description, Butte Lake has water and flush toilets. But heavy winter snows had damaged these facilities and by mid-July the camp was totally dry; no water at all and only a few heavily used vault toilets. Luckily, we were self-contained with jugs of drinking water and a full 56-gallon tank of fresh water in the trailer for showers and washing in our own bathroom. There is no power, no dump station, no cellular signal or any other services at Butte Lake, but it’s a beautiful place.

About a mile and half before arriving at the Park Service’s Butte Lake Campground is a primitive U.S. Forest Service campground by the same name; Butte Lake. This confused us, so we parked our truck and trailer and walked into the Forest Service campground and found it cool and shady by a bubbling mountain stream. But, we couldn’t maneuver our twenty eight foot-long fifth wheel through the narrow, winding roads so we drove on to the Park Service’s Butte Lake Campground instead.

No matter. Since there was no water, the Park Service’s Butte Lake Campground was barely half full and the campsites were spaced far apart under a shady, mature ponderosa pine forest. The camping fee was $15/night, but with my America the Beautiful senior pass we paid half; $7.50/night. And, the lake was beautiful; clear, blue water set in the middle of the black rocks of an ancient lava flow, surrounded by wilderness areas, and The Cinder Cone, a small volcano, just a mile away.

The next morning we drove the twenty-five miles from our camp to the western entrance of Lassen National Park; entrance fee $20/vehicle, (but again with my America the Beautiful senior pass we entered for free). We drove as high as we could into the park hoping to hike up to Bumpass Hell, a volcanic area of bubbling mud pots and steam vents. But the road was still closed due to heavy snow pack even in late July. So, we ate our lunch under the shade of a large ponderosa pine under Lassen Peak and turned back to camp.

Our last morning at Butte Lake we hiked the mile trail out to the Cinder Cone. Sonia turned back for camp while I climbed the steep trail 700 feet up to the summit. It was spectacular on top with a cool wind blowing, Mount Lassen dominating the background, and the deep crater of the Cinder Cone falling away from the rim immediately below. Ancient lava flows of black rock flowed away from the base of the Cinder Cone towards our camp. The view was well worth the effort. 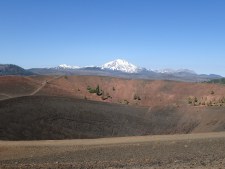 Lassen Park is magnificent, but time for us to follow the Volcanic Byway north to Lava Beds National Monument far out in the hinterlands of northern California. We broke camp, hitched up the trailer early in the morning, dumped our waste tanks at the excellent dump station at the U.S. Forest Service Visitors’ Center in the tiny village of Old Station ($6 to dump, but free with my senior pass), and headed north on rural highway 89. We turned off onto Forest Service Road 49 and took the back way into Lava Beds National Monument stopping at Medicine Lake along the way to check out campsites there (crowded, noisy and hot).

Forest Road 49 degenerated into a dusty, gravel, one-lane track for thirty miles until we finally entered Lava Beds National Monument at its remote southern end. We went immediately to the Indian Wells Campground, the only place to camp in the monument, and found one of the few shady camp sites large enough to fit our fifth wheel trailer into. No power, no sewer dump, but water at community spigots and, . . . bathrooms with flush toilets and sinks, what at treat! Temperatures were into the mid-90’s, but we were happy to have found a home for the next few days. We set up our trailer and settled in under a juniper tree to wait out the hot afternoon in camp.

In the morning we started early to beat the heat. We returned to the southern end of the park and took short hikes to Mammoth Crater and Hidden Valley. Then we explored the strange lava cones of Fleener Chimneys where lava once spouted out a covered the land for miles around. It was getting hot, but we hiked the mile out to Symbol Bridge and Big Painted Cave to see the petroglyphs inside the lava tube caves there.

But the biggest treats were underground. We entered Golden Dome Cave, an extensive lava tube formed underground when the surface lava cooled while hot lava flowed underground forming smooth-sided caves. As we walked deeper into the cool, dark cave our headlamps lit up the ceilings and they were covered in sparkling gold! Pyrite actually; fool’s gold, but spectacular none-the-less.

We finished the day by driving to the north side to see Captain Jack’s Stronghold, a lava badlands where the Modoc Indians held off the U.S. Army for months in the 1870s in one of the last of the wild west’s indian wars. From there we stopped at Petroglyph Point to see the ancient rock carvings before turning back to camp. It had been a long, hot day, but a series of thunderstorms had arrived to cool off the evening, thank god.

Lava Beds National Monument had been an unexpected treat. The place is fascinating. From Lava Beds National Monument the Volcanic Byway continues north following the Cascade Mountains through the glacier-covered volcanoes of Oregon and Washington State. But we had our eyes on the wild, high deserts in far southeastern Oregon, one of the most remote places in the conterminous United States   So, we packed up early the next morning and moved on, leaving the Volcanic Byway behind and moving on into outback of far eastern Oregon.