Zion National Park!   We’d been on the road for over six months by the time we reached Zion. The redwoods of California were majestic, Yosemite was stately. Yellowstone was spectacular, Bryce Canyon National Park surreally beautiful. But Zion; well, Zion is simply stupendous.

After leaving Bryce Canyon we didn’t think anything could top that. But, as we followed highway 9 through Zion National Park we fell silent. This place is over-the-top magnificent. Multi-colored rock in fantastic shapes cover the highlands while the Virgin River flows through a massive valley with sheer sandstone cliffs soaring thousands of feet above and hanging gardens of ferns dripping into emerald pools. 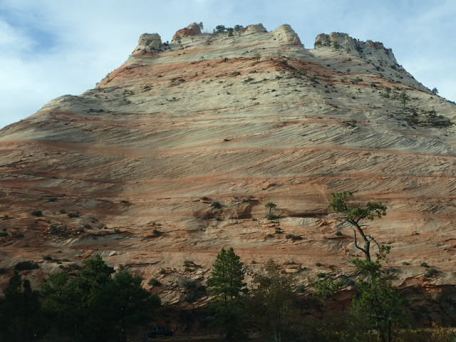 A word of warning for RVers though. Highway 9 enters Zion from the east and passes through a mile-long tunnel, 13’ 4” tall at the center. Our 12’ 6” tall fifth wheel trailer barely fit and we had to get a special pass for $15 from the Park Service to allow you to drive in the center of the road through the tunnel. That’s in addition to the $30 entrance fee for the park (with my America the Beautiful senior pass we didn’t pay an entrance fee).

Another thing we weren’t used to; people. We had been camping in the outback on public lands for so long that we weren’t used to crowds of people anymore. Zion is only two hours away from Las Vegas, three from Salt Lake City, and is on interstate highway 15. It’s easily accessible to lots of people and they were here. That also made it harder to find a place to camp. The national park campgrounds were full of course, but even boondocking locations outside the park on public lands were mobbed. Finally, we found a spot for one night at Quail Creek, Utah state park, for $15/night (no water or power).

The next day we started searching for a campsite where we could set up for a few days without moving again. And what luck! Snow Canyon State Park, just seven miles outside of the tidy small city of St. George, had a cancellation and that one spot was available. We rushed over to the park and paid $25/night for a roomy site with 30-amp power and water overlooking a gorgeous red rock canyon (site 15B). Later we moved to site 21 for $20/night which didn’t have water or power. The park has a dump station and paved biking trails through the canyons.

Again, RVers beware. Although Snow Canyon is spectacularly beautiful, and is a great location from which to explore Zion and surrounding areas, the campground is small with only a few sites large enough to accommodate our twenty eight foot-long fifth wheel trailer. And, it’s very popular with most sites reserved months in advance. Still, there are a few sites available for “walk-ins.” Sites 1 – 14 are reservable shared sites where you are packed together like sardines in a can, literally looking into your neighbor’s living room. Sites 18, 20 and 21 are roomy, private sites available on a first come, first serve basis, but they’re tight for a larger trailer and don’t have water or power. All the rest are reservable, and will probably be reserved. 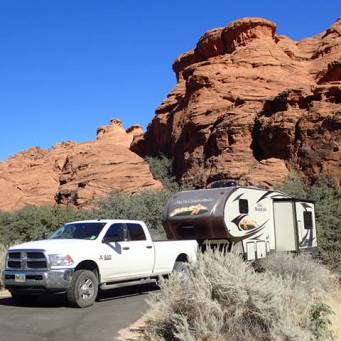 After setting up our trailer we went to town, St George and, . . . civilization! We provisioned up at Costco, ate dinner at Olive Garden, and watched a movie back at camp since we had plug-in electrical power for the first time in many weeks.

We spent the next day exploring the northern end of Zion National Park; Kolob Canyon. This is a spectacular area and far less visited than the main valley of the park. On the way back to our camp we hiked into the Red Cliffs, a small BLM wilderness area near St George. This is a hidden gem with a nice slick rock canyon leading to pools of water and a cave with a few pictographs. There is a nice, shady campground at Red Cliffs, but a pair of ten foot-high tunnels on the entry road prevented us from hauling our trailer into the area.

We hiked around Snow Canyon the next day and the place is amazing. The red rock canyons are covered with black volcanic basalt from ancient lava flows making the landscape all the more interesting. There were hidden canyons, lava tubes (tunnels in the hardened basalt), white peaks with stripes of bright red running through them, and “petrified” sand dunes where ancient sands had hardened into interestingly shaped rock. Early pioneers had signed their names in axle grease on a canyon wall. Snow Canyon packs a lot of punch for a small place near the city. 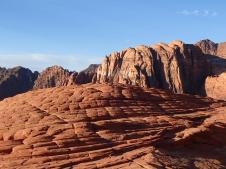 But, we had come to see Zion National Park and, bracing ourselves for the crowds, we drove to the main western park entrance at Springdale. Here we took the park shuttle system into the Virgen River valley (no private vehicles allowed). People or not, it was stunning and we found the shuttle system convenient and were happy not to be driving our large truck around the narrow road.

The valley was lush with cottonwood trees turning gold in the late October sun while massive, sheer walls of red and white rock rose abruptly a thousand feet above. We hiked to the narrows of the Virgen River where the canyon closes in. We hiked to the Emerald Pools where waterfalls trickled from overhanging rims of rock into fern-lined ponds. We spent the whole day hiking around various formations, soaking up the magnificence of the place. 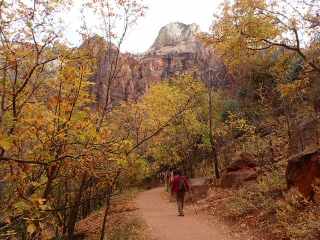 In the afternoon we returned the truck and drove back up highway 9, through the tunnels (without the trailer this time), and into the high country of Zion. As we rounded a corner we stopped for a large herd of bighorn sheep crossing the road in front of us. They didn’t seem particularly concerned and continued to graze on shrubs as we passed, even turning their white rumps to us in a group sheep-moon.

Then, the Zion high country. Amazing! White, pink and red rocks twisted, broken and then worn by wind and rain into smooth, fantastic shapes. We stopped for short hikes through this slick rock fantasyland before turning back as the sun set.

We spent the following day in Snow Canyon, hiking more of the side canyons and desert. We found cinder cones just outside of the park, the source of the large lava beds and slot canyons hidden away along the valley floor. This is a place we’ll return to, there’s still much, much more to see in the area. But we also wanted to explore the desert wilderness around Kanab and the Paria River further east along the Utah/Arizona border. So, we left the next day for the wilds of Vermillion Cliffs National Monument.

Actually, highway 89 winds past both Vermillion Cliffs and the southernmost boundary of Grand Staircase-Escalante National Monuments. It’s a wild country of badlands, slot canyons and wilderness hidden away behind vast, open grasslands. There’s more ravens than peoples out here; our kind of country.

We quickly found White House Campground, a small, primitive BLM campsite on the Paria River, forty miles east of Kanab. A sign said the campground was being renovated, so no fees were being charged. There was no water either, but a clean vault toilet. We set up in a sandy, level spot against a huge rock of white sandstone with streaks of pink running through it and pockmarked with smooth holes. It was fantastic and free.

Then it was down to business; wilderness business that is, and the first day we hiked down the Paria River canyon to “the narrows” where the canyon walls suddenly close in on one another. The hike was wet, in the river most of the time, and we wore our reef shoes to walk through the ankle-deep water. It was over 8-miles round trip, but pretty easy walking, and, it was spectacular. We packed three liters of water and a lunch and spent the whole day walking through the massive canyon with no one else around for miles. 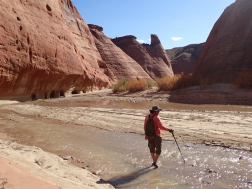 The next day we drove up Cottonwood Canyon, a dirt track that connects highway 89 to highway 12 forty-five miles to the north. Conttonwood Canyon is actually in Grand Staircase – Escalante National Monument, but the road passes through some spectacular backcountry. We jumped a large herd of pronghorn antelope as soon as we entered Cottonwood Road from highway 89, always a good sign. Later, we stopped to hike into the lower Cottonwood Narrows, a large canyon snaking away into the mountain wilderness. 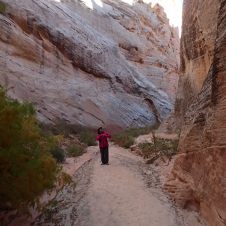 We stopped again to explore a valley of strangely shaped rocks in whites, yellows, blues and reds. It was all magnificent, but somewhat marred by an electrical transmission line that runs right down the middle the length of the canyon. Still, we were amazed by the rough desert around us.

We fueled up at tiny Tropic and drove back to camp, following a family herding cattle down the road, with dad carrying a baby in his saddle and some of the cowboys and cowgirls no more than eight or nine years old and already expert horsemen. We got back to camp at dark, exhausted.

Next day, more hikes. We drove to nearby Wire Pass, a famous slot canyon. We paid the $6/person day use fee and headed off for the canyon. But, we no sooner entered the narrows when we encountered a boulder jammed in the narrow slot canyon. It was a ten foot drop on the other side, no way around it, and we weren’t prepared to descend it. So, we turned around and drove to nearby Buckskin Gulch. We hiked a mile or two down this canyon, much wider with beautiful meadows of bunch grass.

Then we decided to take a side road to something called the Old Paria Townsite. We drove just a few miles down the gravel road, past a Grand Staircase National Monument sign, when suddenly a whole valley of spectacularly colored mountains appeared before us. It was the Paria Breaks, a huge escarpment where whole mountainsides tumbled down to the Paria River in rainbow colors of red, blue, yellow, pink and white. In front of it all was a jumbled badlands of chocolate colored canyons. This was the most amazingly colored rock we’ve ever seen, anywhere. We had no idea this wonderland was even here and we spent the rest of the day hiking around it. 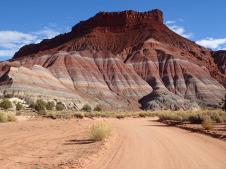 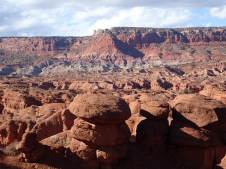 Now we were ready for more. The whole area was filled with hidden wonders and we had barely scratched the surface of all the spectacular places around Vermillion Cliffs. But, we needed to move on to Arizona where we had reservations to stay near Sedona in a state park. We’ll be back to this special place, for sure. Meanwhile, it’s on through Lake Powel and into Arizona for us. We had business to attend to there.