After spending October in southern Utah’s red rock canyonlands we headed south, drifting into Arizona. We had a goal here; checking out possible areas to set up a home base. By now we were used to living in our twenty eight foot-long, fifth wheel trailer. But we still wanted to establish a home base to travel from, and return to. There were a few places in Arizona we wanted to check out as home-base possibilities. The first stop, Sedona.

We drove across the Colorado River at Glen Canyon, through the depressing badlands of the Navajo Reservation, and dropped down from the Colorado Plateau through spectacular Oak Creek Canyon and into the red rock valley of Sedona.

Sedona was our biggest disappointment since we started traveling long, long ago. Set at the base of beautiful Oak Creek Canyon, in a valley of impressive towers of red sand stone, it was beautiful, but swarming with people and choked with traffic. Suburbs and strip-malls sprawl out through the canyons in every direction. It’s a posterchild for what happens to beautiful places when they aren’t protected. The topper was driving up a side canyon to take a hike and instead finding an in-your-face ugly cone of concrete obscenely perched on a spectacular red rock formation; a church. That was enough. We battled our way through the congested small downtown and escaped to our reserved campsite at Dead Horse Ranch State Park outside of small, but hip Cottonwood, twenty miles away from Sedona.

Cottonwood was a much more relaxed, but set in the low desert of mesquite and creosote brush and lacking the striking beauty of the red rock towers around Sedona. We settled into our expensive campsite at Dead Horse Ranch ($30/night with power and water) and spent the next day exploring nearby Jerome, a quirky mining town clinging to the mountains above Cottonwood, and driving the beautiful, narrow backroad over Mingus Mountain to Prescott, a surprisingly pretty, cosmopolitan small city.

The next day we visited Tuzigoot and Montezuma Castle, a pair of small national monuments protecting ancient Singua ruins. They were impressive, set in caves overlooking a beautiful valley of golden-colored cottonwood trees. In fact, the whole area around Sedona and Cottonwood is filled with ancient ruins and petroglyph sites. But, we decided to cut our visit in the Sedona area short. It was definitely not what we were looking for as a home base.

Since we had reservations to stay in a RV park in Tucson the following week we decided to see more of central Arizona on the way south. So, we drove up to Payson in the vast oak-pine forests of the Tonto National Forest. We stayed at the U.S. Forest Service’s, Houston Mesa campground on the edge of town for $12/night (with my 50% senior discount). No power, water at community spigots, and flush bathrooms, but it was near highway 87 and the road noise was constant and distracting. 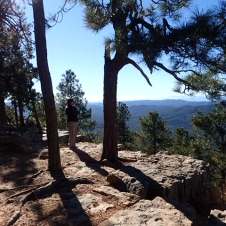 We set up in the mesquite and cactus desert at Cholla, a U.S. Forest Service campground on the shores of Lake Roosevelt and surrounded by desert mountain ranges.  The campground costs $20/night ($10 for us with my senior pass). There are no power hookups, but the campsites are spacious, on paved roads, with community bathrooms, water at community spigots, centrally located shower facilities and a boat launch area. To top it off, we had such a strong Verizon cellular signal that we used it to access the internet. There were few other campers there; the area was quiet and beautiful. We decided to stay for the next five days. 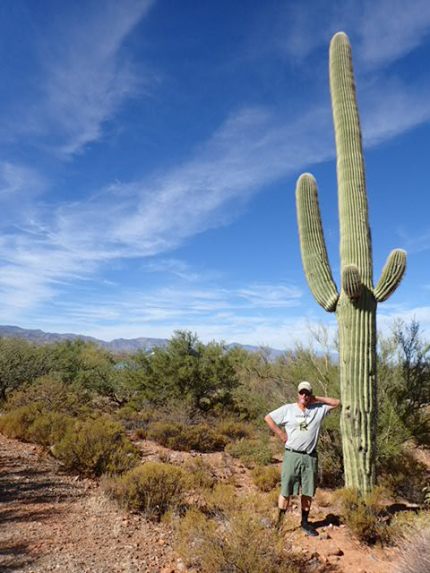 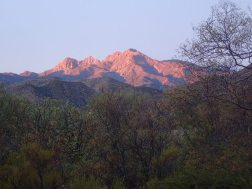 From our comfortable camp we drove narrow, twisted, mostly gravel Arizona Route 88, through magnificent Fish Creek Canyon to Lost Dutchman State Park at Apache Junction on the edge of the Phoenix megalopolis. There we hiked through the saguaro and cholla cactus desert to the granite peaks of Superstition Mountain. It was spectacular, but somewhat marred by noise from nearby, kitschy Goldfield, a touristy old west ghost town. Still, the drive and the hike were worth it. 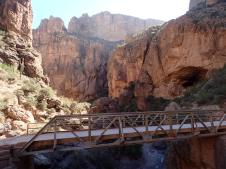 We spent another day exploring Tonto National Monument, just a few miles from our camp, and the ancient cliff dwellings there. Built by the Salado People over 800 years ago, the crude stone buildings were built inside of large caves overlooking the saguaro-forested canyons below. The hikes to the ruins were well worth the effort. 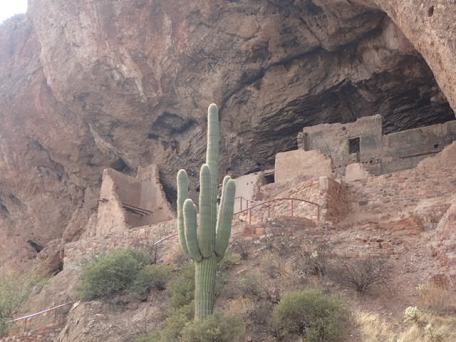 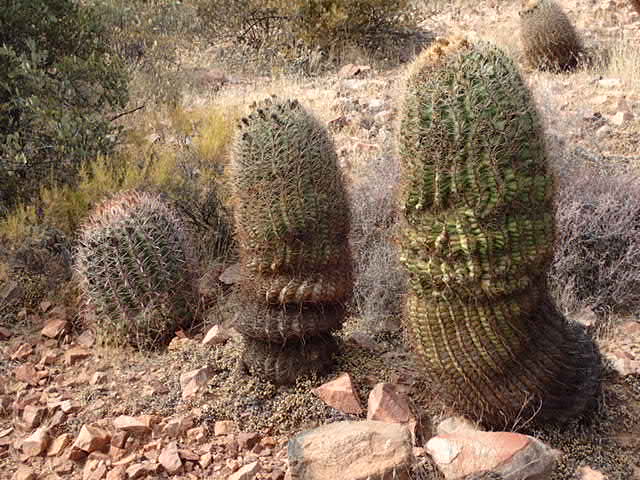 I spent a day hiking into the Four Peaks Wilderness Area just behind our camp. I packed two liters of water and a lunch and started up the Arizona Trail, a backpacking route that runs the entire length of Arizona, although I hiked only a few miles of it. I started in the low desert of yucca and mesquite and climbed into the thick chaparral of jojoba and manzanita above. Then I climbed higher into a dwarf forest of Gambel oak, their yellow leaves falling in the November sun. I had gained about 2,000 feet in elevation and could see across the Superstition Mountains with a few douglas fir and pinyon pines on the ridgetop above me when I turned around – running low on water. It was dead silent. 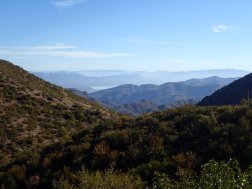 The next morning we packed up and headed south to Tucson as coyotes serenaded us from the desert nearby. There we set up in an offbeat RV park and planned to stay through the Thanksgiving/Christmas/New Year’s holidays.   We had originally planned to check out the Tucson area as a possibility for establishing a home base, but abandoned the idea when we realized how hot it is for most of the year. Now we were just using it as a place to rest up before migrating north again. There’s a lot to explore around Tucson and, we plan to spend a month in Baja California Mexico before hitching up and moving out again. But for now, we’re stationary.