We left our comfortable camp on the Puget Sound near Anacortes and headed east, into the canyons and mountains of the Wallowa Valley in the far northeastern corner of Oregon, one of our favorite places on the planet.

We had reservations to stay for the month of September at the Log House RV Park in Enterprise, Oregon. At $350/month plus electricity for a full hookup site, our rate was about $12/night; a very affordable option. And, the Log House’s location on the edge of town and at the base of the Wallowa Mountains makes it a good base from which to explore the vast canyon country and mountain wilderness of the area. But, when we moved in we found the monthly rate sites so confining that we could barely back our 28-foot long fifth wheel trailer into them leaving just a few feet between our neighbors. The short-term area was much roomier with pull-through sites, but expensive at $35/night. The park is rough around the edges, but owners Brian and Margaret are very nice people and they are constantly improving it.

We started our stay in the Wallowa Valley attending the Labor Day, Juniper Jam music festival in Enterprise in the fairgrounds just behind the RV park. Expecting the usual line-up of country-western bands we were surprised by a day of excellent country-rock and progressive western bands. But, the show stopper was a two-man band, Brother Busk from Portland, led by a 20-year old guitarist with his 13-year old brother on drums. They blasted out a Jimi Hendrix meets the James Gang mash-up that left the crowd speechless.

After that, time slowed down. The warm sunny days and frosty mornings of Indian summer provided excellent hiking weather for the Eagle Cap Wilderness and Hells Canyon. We took short hikes into the mountains, paddled our kayak on Wallowa Lake, explored the small towns of Joseph and Enterprise and made our usual stop at Old Chief Joseph’s gravesite on Wallowa Lake.

By mid-September the first snows blanketed the high peaks of the Eagle Cap Wilderness and our friend Matt arrived on his return trip from Yellowstone National Park. Together with him we drove to the western rim of Hell’s Canyon, the deepest gorge in North America, and spent the day wandering around the edge of the 5,000-foot deep canyon.

As September wore on, the weather grew steadily colder. We started sleeping in later to let the day warm up and spent more time in town, going to the local Barn Dance in Joseph and singing around the camp fire with the permanent residents in the RV park. Our hikes into the mountains were now accented by the crisp autumn air and the bright reds and yellows of huckleberry, snowberry and mountain ash turning color and preparing for winter. 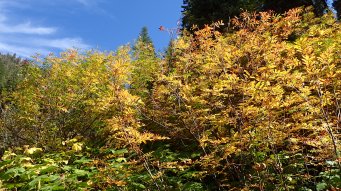 At the end of September another old friend, John, arrived in his jeep. He and I drove down the rough gravel road into the impressive Imnaha Canyon. We drove lower and lower into Hell’s Canyon Country, leaving the forests behind and entering a stark landscape of enormous canyons and dry, grass-covered mountains.  We found the unmarked trail leading down the Imnaha River and shouldered our backpacks for a five mile hike through a massive canyon to the Imnaha’s confluence with the Snake River, surprising a herd of bighorn sheep as we went. The two rivers come together in a gigantic, wild canyon thousands of feet deep. There we camped in a grove of ancient Gambel Oaks below hundred-year old mining ruins while the wild Snake River roared all night and the Milky Way shone brightly across the dark night sky. 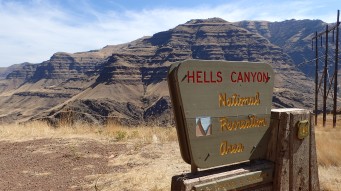 The following day we hiked back out to the jeep and continued on to Dug Bar, a remote old ranch on the Snake River at the end of a very long, and seriously rough gravel road. Dug Bar is where the Nee-Mee-Poo Trail (The Nez Perce Trail) meets the Snake River. This is where the Nez Perce forded the roaring Snake River with their women, children and livestock in 1877 trying to escape the pursuing U.S. Army. We strolled around the turn-of-the-century ranch and silently marveled at the crossing where Chief Joseph led his people across the river and into the mountains above. Even today the river runs deep and fast at this place.

But, we’re already planning on returning to the Wallowas next spring in June, when the wildflowers are blooming and the snow has melted back enough to get around. It’s a huge area and a special place like no other. And, we have plans to explore more of it then.